Visit the site of the Dozza City of Art Foundation

Forteress of Dozza was built around 1250 at the behest of the Municipality of Bologna. The Rocca has undergone numerous expansions and functional adaptations to meet the needs of the various owners who have succeeded one another over the years, which are still visible within the museum’s tour route.

The castle of Dozza in medieval times assumed a strategic position and for this reason was the subject of strong disputes between Bologna and Imola that led to numerous constructions, destructions and reconstructions until the 15th century when it became part of the Riario-Sforza domains.

The Riario family initiated substantial fortification works such as the construction of strong rounded towers, the deep moat and the drawbridge, made the Rocca a true military fortress.

In the Renaissance period it was used as a noble residence at the behest of two powerful Bolognese senatorial families: the Campeggi and Malvezzi families.

Today the complex is presented as a house-museum that offers its visitors three routes to experience: the Medieval-Renaissance Fortress, the Renaissance Residence, and the 18th-century Residence. Precious furnishings, antique paintings and enchanting historical objects of the Malvezzi-Campeggi family charmingly decorate the nine rooms on the main floor and the historic kitchen.

Dozza is considered one of the most characteristic medieval villages in the Tuscan-Romagna Apennines, both for its state of preservation and for the beautiful landscape in which it is set. The name Dozza derives from medieval Latin ducia (shower, gargoyle, gargoyle);The etymology refers to the concept of a canal that conducts water.

The Rocca and Rocchetta with the Rivellino (the characteristic military fortification with 2 detached flanks rising to the inner escarpment) date back to the 13th century.

In 1412 Dozza became a fief of the noble Alidosi family, which then later ceded the village to the Riario family.

During the xv and xvi centuries Dozza was under the rule of Caterina Sforza wife of Girolamo Riario, it was the latter who defined the appearance of the Rocca and the defensive walls that still characterize it today.

In 1728 the enfeoffment of the Campeggi family ceased and the Holy See assigned the fiefdom to Emilio Malvezzi. The rule of the Campeggi-Malvezzi marquises particularly accentuated the military appeal: seventeenth- and eighteenth-century paintings belonging to the two families can be seen inside the Rocca.

Inside the Rocca the fascinating Hall of Supplizi, the Ancient Prisons and the charming Kitchen are accessible to the public. The ancient layout of the medieval village of Dozza remained unchanged for centuries, until the early 2000s when a restoration of the cobblestones of Via XX Settembre was carried out, which made it possible to reopen the embrasures, recover the ancient fountain and bring to light a large olla from the late 19th century, now visible at the entrance to the Rocca.

The Sforza fortress is a castle dating back to medieval times that stands in the center of the city of Imola. The construction of the fortress dates back to 1261 and is one of the finest examples of a Renaissance fortress in the region.

Over the years it has welcomed notable guests within its walls including: Niccolò Machiavelli, Caterina Sforza, Cesare Borgia and the famous Leonardo da Vinci. In 1502 atop the towers of the Rocca Da Vinci drew the famous Map of Imola, now housed in the Royal Library in London.

When Imola came under Papal rule the Rocca lost its defensive function , and from 1524 it became a papal prison and remained in operation until 1958.

In 1973 the Rocca was opened restored and opened to the public as a museum. Today it houses a prestigious collection of ceramics and a remarkable collection of weapons dating from the 14th and 20th centuries.

The Municipal Library of Imola traces its origins to the Library of the Minors of St. Francis of Imola. The initiative to build a library inside the Franciscan convent was due to Father Giuseppe Maria Setti, who in the mid-18th century tied his income to the construction and maintenance of the library, which is still preserved in its original elegant 18th-century form.

During French rule the religious library was confiscated from the Friars Minor and given to the municipality. During this period other ecclesiastical libraries of Imola converged on San Francesco following requisitions made from the suppressed religious corporations. On January 11, 1799, the Library named “ National” was finally opened to the public. 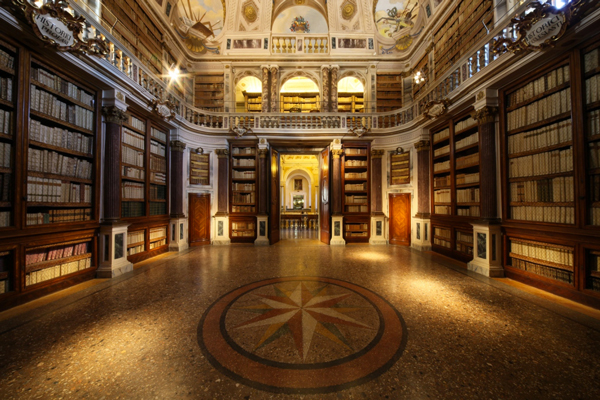 The Noble Residence of Count Tozzoni represents a remarkable example of a well-preserved inhabited noble residence. For centuries it was inhabited by noble families and then only later became a public museum. Inside, one is enveloped by the remarkable late Baroque architectural structure with its ancient and striking furnishings.

The rich exhibition itinerary winds its way through sumptuous rooms such as the Baroque Apartment, the entrance staircase adorned with statues by Cosimo Morelli, prestigious picture galleries of paintings, collections of prints, medals, stucco and enchanting ceramics.

The cellars and domestic spaces can be visited by the public and house a rich collection of tools and implements of the local farming civilization of great historical interest. 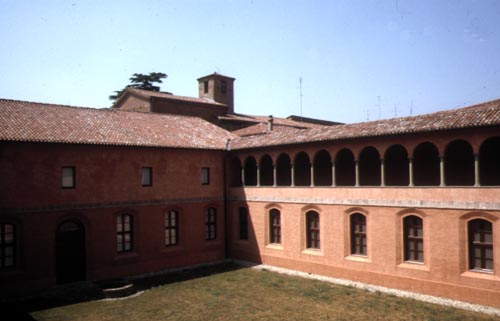 The San Domenico Museum was founded as a convent and has fourteenth-century origins; the city’s art collections are displayed inside. In recent years the convent complex has undergone a careful renovation with the aim of housing Imola’s Civic Museums in a single location.

Since 2011 it has been open to the public and has on display about 600 pieces including evocative paintings, precious sculptures, archaic ceramics , prestigious Renaissance mugs, drawings, coins and medals from the civic collections related to the history and culture of the city of Imola.

On display inside are works of art covering different historical periods ranging from paintings by Innocenzo da Imola , Lavinia Fontana, Bartolomeo Gandolfi to works by contemporary artists such as Filippo De Pisis to Giorgio Morandi.

Alidosi Palace is the seat of the municipality dating from the 16th century, encloses the Renaissance Cortiletto delle tre fontane with a loggia supported by three columns and frescoes by painter Giuseppe Pasini.

Inside you can visit the Chestnut Museum and the War Museum, with more than a thousand war relics from World War I and World War II.

The basement houses the Cantinaccia, a place to welcome tourists, sell food and wine and taste local products.

The Alidosi Bridge is an authentic masterpiece of civil engineering by architect Andrea Guerrieri. The bridge was commissioned by Obizzo II Alidosi in 1499 with the purpose of highlighting the power and stability of the Alidosi family. The construction of the bridge facilitated trade in the valley by benefiting the town of Castel del Rio, the last fiefdom of the Alidosi family.

In 1897 it was proclaimed a national monument. The bridge possesses a humpback structure with a single 42-meter arch and a 19-meter spur that crosses the Santerno River. 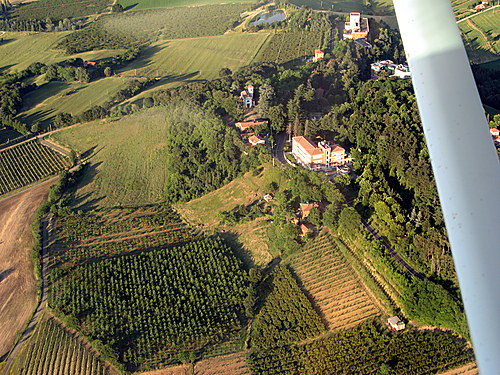 The bed & breakfast in Dozza is located a few kilometers from Hospital Montecatone, which specializes in health care for the treatment of patients in critical condition, treatment and Spinal Cord Injury Treatment of severe brain injury.

Save and Close
Go to Top